Mexico offers everything, beaches with white sand, high waves for surfing, archaeological sites of great importance, including the seventh wonder of the modern world, Chichen-Itza; beautiful colonial cities, colourful folklore and gastronomic diversity. Learn and live in a single trip all the diversity that Mexico offers with the itineraries by Travel Just 4U. 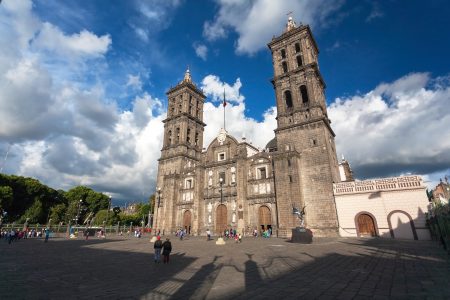 Mexico’s fourth largest city, Puebla is best known for the beautiful Talavera tiles that adorn its walls, domes, and interiors; and for the mole poblano, Mexico’s national dish that originated here. The streets of Puebla, a World Heritage Site, are lined with churches, mansions, and other handsome buildings and are a delight to stroll around.

Ten kilometres west of Puebla lies Cholula, a small colonial town with some fine churches, and the remains of the Tepanapa pyramid, measuring 450 metres along on each side of the base and 65 metres high, making it larger in volume than Egypt’s pyramid of Cheops. Now overgrown and topped by a church, it is difficult to recognise the remains of this magnificent pyramid.

Oaxaca, located in a valley surrounded by the Sierra Madre del Sur, was once the center of the Mixtec and Zapotec civilizations. Today’s Oaxaca is a combination of pre-conquest, colonial and modern influences. The early Zapotecs developed a great civilization at nearby Monte Albán centuries before the birth of Christ. Two of Mexico’s most famous presidents, Benito Juárez and Porfirio Diaz, were of Zapotec origin.

After the Spanish conquered Oaxaca in 1533, the city quickly took on a Spanish flavour, with ornate buildings, churches, elegant archways, balconies, decorative grill work and charming plazas. Yet despite its colonial heritage, the city remains basically Indian at heart, wherein lies its charm. 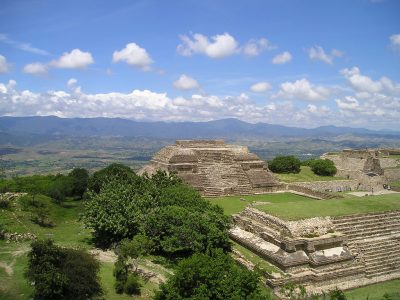 We will visit Monte Alban – a World Heritage Site – spectacularly situated on a mountain 400 meters above the Oaxaca Valley, a few kilometers west of Oaxaca. Monte Alban is the greatest of the Zapotec cities, and it came to dominate the cultural, religious, and economic life of the region. It is also a triumph of engineering; the mountain top was leveled to allow for the creation of the ceremonial site. We will explore the Gran Plaza, the Ball Court, the Observatory, the Palace, and other beautiful structures.

We will visit the “Arbol del Tule”, one of the world’s largest trees, and thought to be over 2000 years; after that we will continue to the archaeological site of Mitla, located 46km southeast of Oaxaca. Mitla was an important Zapotec city after the decline of Monte Alban, and it was later occupied by the Mixtecs. Many of Mitla’s temples were destroyed by the Spanish, and the stones were used to build the Iglesia de San Pablo, the Catholic church that dominates the site. We will explore the beautiful buildings with their unique geometric stone mosaics, and the church in their midst. On our way back to Oaxaca we will stop at a distillery for mezcal tasting and to watch the elaboration process.

San Cristobal de las Casas is a characteristically indigenous Chiapaneca town nestled in the heart of the jungle highlands. The only way to reach San Cristobal is via a two-hour drive from Tuxtla Gutierrez. En route, the tropical heat and plant life prevalent in Tuxtla Gutierrez gradually give way to the nippy mountain air and pine forests that surround San Cristobal, where days are sunny and warm, and nights may be chilly. Amber, the translucent stone derived from fossilized coniferous resin, is plentiful in the region, and attractive shops in town display creative jewellery fashioned out of silver and the ancient rock. 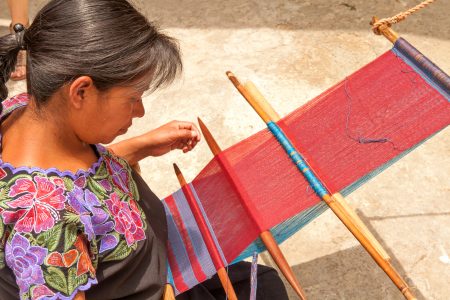 We will explore on foot the colonial city center of San Cristobal de las Casas. We will visit the cathedral, on the north side of the pretty main square, with its lavish interior and gold-encrusted pulpit. We then walk a few blocks to the impressive 16th-century Dominican church Templo de Santo Domingo, with its intricate pink facade and gilded Baroque interior. Time to browse the handicraft market in front of the church, where Tzotzil Indians from the surrounding hills come to trade. We then drive 10km into the Chiapas highlands, to the Tzotzil Indian villages of San Juan Chamula and Zinacantan. The Tzotzils descend from the ancient Maya and maintain some unique customs, costumes and beliefs. We will visit the beautiful white church in San Juan Chamula. The candles, incense and chanting worshippers make a powerful impression. We then drive to the nearby village of Zinacantan, with its pretty church and handicraft market. Return to San Cristobal. Approx. duration 5 hours.

We will drive to Agua Azul, a place where over 500 cascades create incredible turquoise colored “pools” surrounded by the rainforest. After that, we will continue to Palenque, drop off at your hotel. We will visit the archaeological site of Palenque, a World Heritage Site, located 7km outside of the town of Palenque. Palenque flourished between AD600 and 800, when its influence extended throughout the basin of the Usumacinta river. The site, surrounded by rainforest where toucans and howler monkeys live, is made up of some 500 buildings spread over 15 sq km, of which only a few have been excavated. We will explore the magnificent ruins, including the Temple of the Inscriptions – the tallest and most stately of Palenque’s buildings, the Temple of the Sun – crowned with a prominent roof comb, The Palace – with its maze of corridors and rooms, and many other beautiful buildings.

On the way to Merida, we will visit the archaeological site of Uxmal, a World Heritage Site, located 80km south of Merida. Its architecture is characterized by low horizontal palaces set around courtyards, decorated with a profusion of symbolic motifs and sculptures depicting the long-nosed rain god Chaac. We will explore the magnificent buildings, including the House of the Magician – which dominates the site, the Nunnery, and the House of Turtles.

We will drive to the archaeological site of Chichen Itza, located 120km east of Merida. Chichen Itza – one of the New 7 Wonders of the World – is the best restored of Yucatan’s Mayan sites. We will explore the magnificent ruins set in a dense jungle, including the Pyramid of Kukulcan – its height and striking geometric design dominating the whole site, the Great Ball Court – the largest and most impressive in Mesoamerica, the Sacred Cenote – a natural well used for human sacrifice, and many other beautiful temples. From Chichen Itza we head to the white sandy beaches of Cancun (approx. 2 ½ hour drive). Pick-up hotel Merida. Drop-off hotel Cancun. Approx. duration 11 hours. .

Day at leisure, time to relax and enjoy the beach.

40 years ago Cancun was no more than a sand bar, clinging to Mexico’s Caribbean coast. Only in the 70s the government saw the appeal of the area’s bright turquoise waters and sparkling white sand, largely untouched since the mysterious decline of the Mayan empire around the 13th century. Today, Cancun is an exciting beach destination and gateway to the Mundo Maya, or Maya World. Enjoy the magnificent beaches, crystal-clear waters and elegant hotels, as well as the breathtaking nearby Mayan ruins, exotic wildlife, and colonial towns. Some of the best diving and snorkeling can be found here!

This morning you will be transferred after breakfast from your hotel to the airport in Cancun. Your Magical Mexico itinerary concludes here.